Welcome to the website of The Geriantics. We are a group of older people who want to sing, perform, and have a good time by showing older age doesn’t have to be dull. Cover photo by www.dubbelxposure.co.uk. 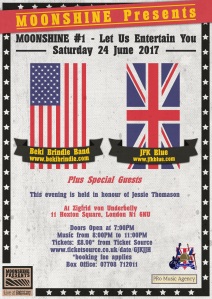 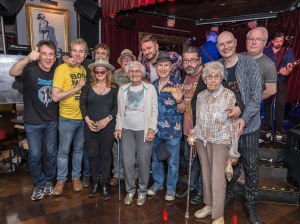 In 2017, band member Jessie Thomason sadly passed away. She is much missed. A night of music was put on in Hackney where she lived, in her memory.

Grace Cook and Irene Samain, two of Jessie’s friends and fellow members of The Geriantics, appeared on the night, both ladies themselves aged in their 90’s, and are in the photograph above, by www.dubbelxposure.co.uk.

Sadly, one of The Geriantics passed away recently.

Jessie Thomason of Hackney, London, was in her 90’s and an inspiring lady who is remembered with great fondness.

You can see Jessie entertain in these videos from when she was a member of the group The Zimmers. 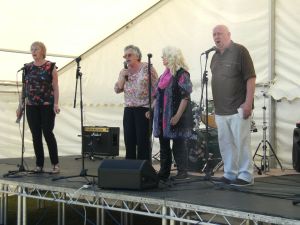 We made our debut, singing on stage at the Big O Festival in Orpington on 4th July 2015. Now we’re recruiting new members and looking forward to doing more things, and not just singing.